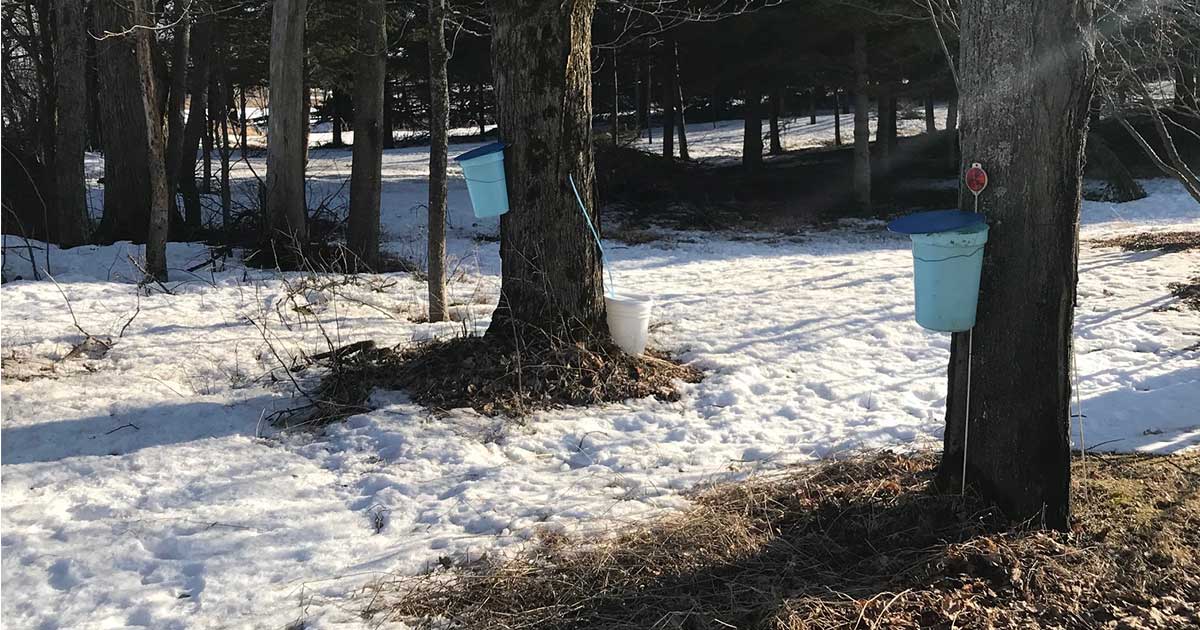 The maple tree is part of Canada’s national identity, with its iconic leaf situated at the centre of our country’s flag. The maple trees of Canada do not only provide a great visual, but a delicious treat as well. The sap found within can be boiled down to create maple syrup, a delicious addition to any breakfast.

Making Your Own Maple Syrup

A bottle of maple syrup is as close as the condiment aisle of your nearest grocery store, but what’s the fun in that? The trend is toward DIY, and just as adventurous beer-lovers prefer to create their own brews, maple syrup enthusiasts with access to a few maple trees enjoy boiling their own maple syrup. The toils of some moderate work only enhance the flavour.

Collecting tree sap and transforming it into maple syrup is an activity that can be enjoyed by rural and urban dwellers alike. A couple of taps and some patience will allow anyone with two or more maples to gather the necessary sap to start their own maple syrup operation.

Getting started with your own maple syrup micro operation does involve a bit of research and a few purchases, but it’s hardly akin to creating a complex manufacturing facility. A drill, along with some taps, hooks and hanging buckets will allow you to collect sap. A larger bucket will allow you to transport sap, while a large pot or pan is suitable for boiling. An outdoor firepit or propane rig, a cooking thermometer and some jars or bottles for canning complete the basic necessities. Farm supply stores, hardware stores or maple syrup equipment dealers will be happy to sell you everything you need.

Maple syrup is made in the spring. The late afternoon sunlight causes the best sap flow, and early season maple sap typically has the highest sugar content. Springtime is a great time to get out of the house, and starting the annual maple sap tap is a great way to combat cabin fever. As winter gives way to slightly longer days and more bearable temperatures, simply spending time in the trees is its own reward, and the promise of syrup itself is simply a bonus.

Maple syrup is produced by boiling away the water found within maple sap, leaving behind the sugars, minerals and amino acids which comprise the syrup. The first step is obviously collecting the maple sap, which is accomplished by drilling into the tree at an upwards angle and inserting the tap. Small buckets are hung beneath the taps, which slowly fill with sap.

Collect the sap until enough has been accumulated to begin the boil. The sap is boiled in a large evaporator. When the sap has been reduced, it is filtered through a piece of cotton and transferred to a smaller pan in order to finish the boil on a stovetop or barbecue. Conducting the optimal boil is somewhat of a knack, and involves slowly adding additional sap to prevent scorching. Like any worthwhile craft, there is a learning curve, and practice makes perfect.

Maple syrup production is a labour of love, and a great group activity. Having some assistance during any phase of the operation not only lessens the workload, but provides for some good camaraderie. Those who take part can be rewarded with a bottle of the finished product, and, unlike hunting, which tends to turn off a certain segment of the population, maple syrup production can be enjoyed by everyone. Experiencing the steps involved in transforming tree sap into edible syrup helps to showcase the food production process and dispel the perception that food magically grows at the grocery store.

While the joy of maple syrup production lies in the journey, the eating isn’t bad either. There’s a reason why maple syrup has endured in the form of maple candy, and as a popular topping for pancakes, waffles, ice cream and other various desserts and that is simply it’s undeniable good taste. For many of us it’s a taste that calls to mind Saturday mornings spent watching cartoons and eating pancakes. A fun activity that results in an enjoyable product is well worth doing, which is why maple syrup production remains such a popular activity.

Sign up today for the newsletter, so you don't miss out when new blogs are posted.